Obituaries and those who write them 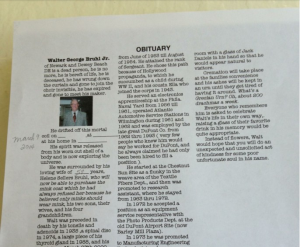 Defying a history of somber and factual, I’m seeing welcomed injections of humour – including obits written by the deceased.  Before, of course. This means leaving blanks as you can see from above picture.

Walter George Bruhl Jr. of Newark and Dewey Beach DE is a dead person, he is no more, he is bereft of life, he is deceased, he has wrung down the curtain and gone to join the choir invisible, he has expired and gone to meet his maker.He drifted off this mortal coil on March 9, 2014 in Punta Gorda, Florida. His spirit was released from his worn out shell of a body and is now exploring the universe.He was surrounded by his loving wife of 57 years, Helene Sellers Bruhl, who will now be able to purchase the mink coat which he had always refused her because he believed only minks should wear mink. – 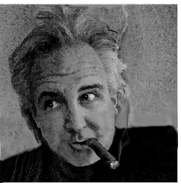 McGroarty Achieves Room Temperature! Kevin J. McGroarty, 53, of West Pittston, died Tuesday, July 22, 2014, after battling a long fight with mediocracy. He enjoyed elaborate practical jokes, over-tipping in restaurants, sushi and Marx Brother’s movies. He led a crusade to promote area midget wrestling, and in his youth was noted for his many unsanctioned daredevil stunts.

A thoroughly irate woman decided to use her obit to vent:

It pains me to admit it, but apparently, I have passed away. Everyone told me it would happen one day but that’s simply not something I wanted to hear, much less experience. Once again I didn’t get things my way! That’s been the story of my life all my life.”

One of the few advantages of dying from Grade 3, Stage IIIC endometrial cancer, recurrent and metastasized to the liver and abdomen, is that you have time to write your own obituary. (The other advantages are no longer bothering with sunscreen and no longer worrying about your cholesterol.)

But my fav to date, that packs a lot of, hmm, interesting information about the late Mary Patricia Stocks, as posted in the Toronto Star

Pat Stocks, 94, passed away peacefully at her home in bed July 1, 2015. It is believed it was caused from carrying her oxygen tank up the long flight of stairs to her bedroom that made her heart give out. She left behind a hell of a lot of stuff to her daughter and sons who have no idea what to do with it. So if you’re looking for 2 extremely large TV’s from the 90s, a large ceramic stork (we think) umbrella/cane stand, a toaster oven (slightly used) or even a 2001 Oldsmobile with a spoiler (she loved putting the pedal to the metal), with only 71,000 kilometers and 1,000 tools that we aren’t sure what they’re used for. You should wait the appropriate amount of time and get in touch. Tomorrow would be fine. This is not an ad for a pawn shop, but an obituary for a great Woman, Mother, Grandmother and Great-Grandmother – See more at: http://www.legacy.com/obituaries/thestar/obituary.aspx?n=mary-stocks&pid=175314461#sthash.oAytVaQS.dpuf

These new approaches to The End give me hope and inspiration.
Time to get started on my own obit. Hmm let see..
Suggested reading: Culture, Traditions and Being Remembered
Grief Relief