It was a day of music, arts and drama, of passion and compassion, entitled, Bringing Creativity into Clinical Practice with older adults.

Bringing creativity into a Clinic Day brought relief and hope to many working with Dementia and Alzheimer’s patients. The presentation was refreshingly unlike most clinical education and on breaks, we were greeted by a Drum Circle, lead by Terri Segal, Expressive Arts Therapist, Not just a demonstration, we were encouraged to pick up a percussion tool and join in. A combination exercise and mental health break. 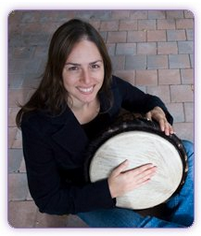 Another presenter – a psychiatrist –  showed photography assignments from nursing home residents, whose average age was 87, entitled:

“A View of the World though the eyes of the Elderly: I’m 90 going on middle Age.”

One of the photos – a self-portrait assignment – won first prize at an art show: it had been submitted anonymously and the winner surprised everyone when she wheeled over to accept.

Robin Glazer, Director of the Creative Center: Arts in healthcare, in NYC was quick to point out that her ‘arts’ are not the same as Art Therapy.

“There is no agenda here. It’s de-stressing and fun. We have excellent artists who are flexible and design their approach to the audience. For example, in a group of Japanese elders, our artist started with simple Japanese brush strokes: something they’d be familiar with.”

She told of her own experience – which she attributes to honing her observational skills through art appreciation:

“I was invited to Grand Rounds at a hospital that one of our artists is at. I saw a young man with an unexplained rash on specific parts of his body: around his upper arm tattoo, around his mouth, on his upper chest and his ‘privates’. One of the docs asked me what I thought. I asked if anyone had read his t-shirt, which said Refrigeration Repair Service. I suggested that maybe he had a reaction to the coolant that was on his hands – which he then touched to those parts of this body.” 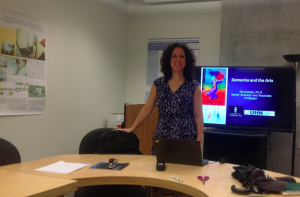 Pia Kontos, a Social Scientist and Research Scientist at a Rehab Institute showed videos designed to illuminate the humanistic side inside every cognitively impaired person. One of the short vignettes showed an Alzheimer’s patient determined to move her string of pearls to the outside of the bib she was wearing.

“This woman wanted to assert her individuality: Struggling with something doesn’t always mean help is needed.

I chose the workshop, Creating New Worlds: Finding New Potential and Well-being for Seniors through Art Making which had us at tables arranged with leaves, construction paper, texture paper, crayons, scissors and glue sticks. 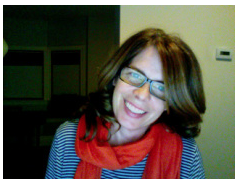 Jennifer Polo, Principal Artist, “Living Through the Arts Outreach program” facilitated this hands-on exercise, and walked us through how the process  itself is theraputic, and giving this example of the freedom of creativity :

One of the patients had Parkinsons and was self-conscious ,so we encouraged him to let his tremour be part of the art.” 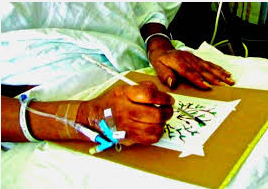 In the “Voices of the Terraces Theatre Troup” a video presentation written and starring 80 and 90 year olds. In one of the vignettes, a wheel-chair bound man says,

“I feel like I’m back in a stroller. But nobody tells me I’m cute.”

Another workshop, “Creative Storytelling: Catching a Glimpse into the lives of Seniors with Dementia” by Recreational Therapist Alysa Heersink, demonstrated the story-telling method used with people with moderate to severe cognitive impairment. and employing a sensitive questioning process, complete with an ‘echoer’ – a person whose job it is to repeat for quieter contributors, or repeat the question for the harder of hearing,

‘I often use a picture with a person in it. I ask ‘Where do you think this is taking place? What’s the weather like? What’s this person’s name.’  We have a blast coming up with our own stories.”

“It is in the presence of the creative process that transforms life.”

End of life discussions and next Tuesday’s dinner