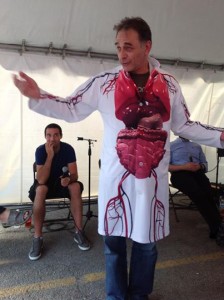 Pictured here in his ‘teach about Crohn’s’ lab coat, he shares his thoughts on ont of Best Endings topics: Who’s important to you?

Who’s important in my end-of-life plan?

Contemplating that question, it took me a moment to realize that “I’m important!”

Taking Inventory of Who I Am

It starts here, similar in some respects to a computer chip, the intelligence that powers the organism, I am:
61 years old, orphan son

Who are my ‘important’ extended family relationships?

I’m going to have to determine what guidance I’ll have to give them so they’ll feel comfortable with themselves about my situation.

Beyond blood: Chronic illness is a team sport.

As a Crohn’s disease patient, I have several team members. While I may be the Captain of my Team, for over 30 years I’ve relied on someone in particular who’s played many important roles. It’s no secret that my wife, Cec, has been on this trip with me for decades. She’s managed my life and my kids when I’ve been in and out of hospital like a revolving door. I can’t imagine outliving her, after all, she’s one of those damn healthy teachers. So I’m counting on her hanging around to be at my side, supportive and playing the good wife role to the very end.

I have a family doctor, a gastroenterologist, and a dermatologist, all of whom I see on a regular basis. There always seems to be someone else joining in at times, from naturopathic doctors to physiotherapists, nutritionists, surgeons etc.

I go to a clinic every 2 months to get medication via an intravenous drip. This is another support team – from the nurses who infuse and care for me, to the pharmacists and coordinators who schedule the appointments.

Living with a chronic condition, nothing is simple

As an example: I can have what appear to be simple problems. A skin infection for instance: Lots of people think a course of antibiotics would take care of that. They’re probably right – for most healthy people that is. For me, however, it’s not automatic. One key reason is that my medication, in order to keep my Crohn’s in check, effectively suppresses my immune system.

This makes simple situations like an infected paper cut or an abscessed tooth a significant challenge because antibiotics and the biologic drug I take don’t like each other. Understand that patients are warned that “fatal infections” have been known to occur. This is no trivial matter to me and I’m ultra vigilant anytime I get a simple cut anywhere on my body. I rely heavily on my entire medical team anytime I have a situation that resists healing. The price for neglect could be my life.

Taking ‘blood relations’ out of the end-of-life equation:

Who else plays a part in my life that’s not superficial? I haven’t ranked them in priority, but there’s a bunch of people who all play an important role in my life and will continue to do so to the very end:

There’s much to consider, as I consider ‘managing’ not just my own health but those who will likely remain important and very much a part of my life, right up to the end.