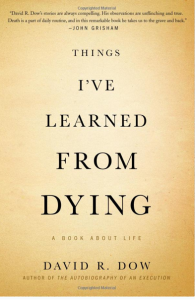 Living, knowing you are going to die

Drawn, as I am, to learning ever more about how we die, and how ‘one’ dies, this David Dow title, “Things I’ve learned from Dying

Dow – who is very much alive – is a death row lawyer in Texas
. He writes beautifully about, and pours insight into the humanity of those on the row.

But that’s not why I found his book so important and compelling: it’s the parallel story that I fastened on: Dow’s story of Peter – his father in law –  who died within a year of diagnosis. Throughout the sickness, its treatment and decisions about, Peter shares with Dow some light, along with the darkness of regrets, disappointments, conflicts and depression, and self-awareness. These emotions and reactions along the journey, tell an eternal story:

Not wanting to lose a loved one, perhaps at the cost of the loved one’s quality of life

“You all want me to stay alive, but that is because you want me to be in your lives. Of course that flatters me, and makes me happy and sad, but that desire does not give you a ballot, and even if it did, it is wrong to cast a vote that treats me as a means to your ends. I want to die with dignity, and you are all determined to thwart me.“

Peter is the loved one, torn between his own needs and those of his family:

“For [daughter] Katya, either I am here or I am not. For me the line is elusive. If I submit to more chemotherapy and fight, I will die. If I tell the doctor no, I will die. Either way, I will never climb another mountain… remaining alive is not worth very price. I don’t know how to say that to Katya without sounding cruel.”

A scientist by nature Peter shares this encounter with science:

“He told me it was the accepted protocol. I said Accepted by whom He said Melanoma specialists. I asked him how much longer I would live with it than without. He said he could not be sure. I told him it is hard to made a decision with no data…. What I did not say to him is that following a course of therapy simply because everyone else follows it is not science. It is a way to pretend to care.”

The crises encountered remind of the need for vigilance during every health journey:

“He (the doctor) prescribed a dose of the anti seizure medication based on a man of Peter’s height and weight. But that calculation assumes normal liver function. Three-fourths of Peter’s liver was gone.”

As elegant and eloquent as the stories are – of the men in his life who know they are going to die, poignant, too, is the story of Dow’s trying to help, both his father-in-law and his death-row clients.

In his TEDtalk:Lessons from Death Row Inmates . Dow speaks passionately about the wrongness of death penalty – as he does in this book. His sensibilities echo those of my documentary producer brother, John , who always gets to the humanity behind the headlines in his prison-related topics.

There’s always more to the story of living and dying.

Suggested reading: Grief and grieving, in life and death