Long Term Care and Retirement Communities Conference: Together We Care

Canadian Astronaut, Commander Chris Hadfield, showed his chops as a stand-up comedian at the Together We Care: Long Term Care and Retirement Communities Conference. “There is no bad situation that you can’t make worse.” In his keynote, Commander Hadfield offered an out-of-this-world opportunity to study a disease of aging: space travel causes bones loss; coming back to earth, bone regenerates. In the spirit of Hadfield’s use of twitter to share beyond his capsule, tweeters at the conference shared with their communities: 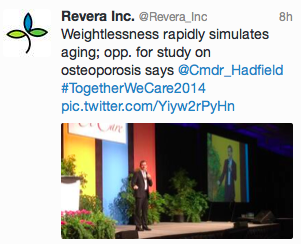 Hadfield’s message gave this perspective on his measure of success: 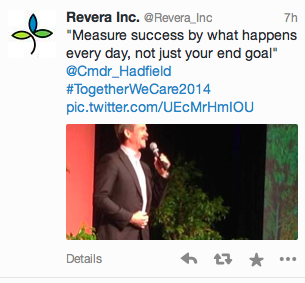 Winston Churchill on ‘media relations’: “Be honest. Be brief. Be seated.”

Hadfield is a media darling who needs no training to answer newshounds. Health, on the other hand, seems always under fire. In a panel led by author and news veteran, Steve Paikin, and featuring health reporter Andre Picard, former Ontario Hospital Association CEO Tom Closson, Psychologist, Dr Maggie Gibson, and Robert Waite, bandied about answering to the media in a healthcare crisis, with Picard advising: “There’s no shame in saying ‘I don’t know’ “.

On a more serious note, Dr Sherry Dupuis, whose life focus is humanizing those with Dementia points out, “all behavior is communication”, and wants us to consider ‘intent’ before assuming a person with dementia is out-of-control:

“We have to look at the intent behind the behavior. Even with severe Dementia, people can communicate with intent, which is often mis-interpreted as ‘disruptive bvehaviours’. As an example: every day, the man with Dementia would come into the lunchroom and knock the hat of the head of another resident. Eventually, someone realized that (until recently) eating with your hat on was considered rude and impolite.”

I was enchanted by the way she reframed the language of behaviours, turning ‘wandering’ into ‘exploring’, and garbled language into ‘poetry’:

She shared another anecdote: how a nugget of knowledge helped patient and caregivers alike:

“3 personal support workers (PSWs) and a Health Aid were trying to get the woman into the bath. She fought like a tiger. Later, in her file the note: ‘she’s afraid of water; being moved is painful’. The routine was changed: a mechanical lift was put into place, and she was given a a sponge bath. The result: reduced human and system costs.”

“The Next Gen has a Zero Tolerance mentality”

With many so-called responsive behaviours resulting in violence, an audience member suggests school as a place to spark a change in thinking:

As Dr Dupuis astutely ponts out:”With the rise in Dementia, it won’t be long before we are all touched by it”, giving yet another example of labelling without considering context or intent:

“It’s always so hot [in the ‘home] I have to take my clothes off to cope. Just wait: I’m going to be labelled as having sexual issues.”

Much food for thought, along with terrific insights, at the Together We Care Conference. #TogetherWeCare twitter impressions: 592,393. Read all tweets