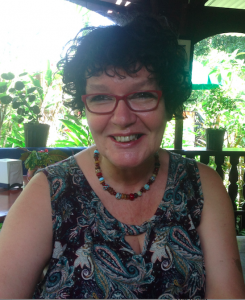 Andrea’s mother had a ‘beautiful’ death

“My mother was ‘dying’ for about 10 years – with her sickness, she seemed often on the brink of death, and then she’d rally. We’d all said our goodbyes a number of times. But on the day she actually died, my father was in her bed, his arm around her, holding on to her. He’d been in this position for a long time when my former brother-in-law came to visit.

“My mother and her former son-in-law had kept up a really special relationship even after my sister had divorced him. They were very close and spent a fair bit of time together. My father would call him ‘her spiritual companion’. When he came into my mother’s room, she was looking grey and frail. My father’s arm was falling asleep holding her.

‘Can you take over here?’ he asked when former brother-in-law appeared. Take over he did, cradling my mother against him. My mother looked at him and her face lit up. Her cheeks became rosy and her eyes twinkled. She looked like a teenager again. She smiled, and took her last breath. It was a beautiful death. I was glad to have been there. Interestingly, when I was about 5 years old, I had a dream that my mother died in the arms of a younger man. It was the only such dream I’d ever had.”